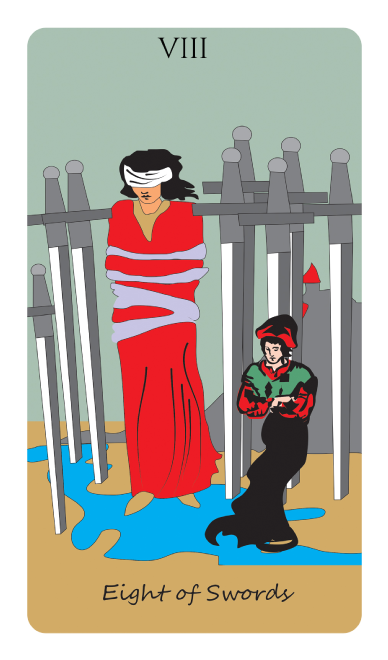 The Eight of Swords can look like a fairytale gone wrong. A young woman is tied and blindfolded, standing helplessly surrounded by eight Swords, which seem to be imprisoning her. Behind her is a castle. She feels trapped and alone.

The blindfolded woman on the Eight of Swords card has great significance. She represents your ability to believe that you will ever be free from your current problems. Sometimes even the slightest problems can seem overwhelming. Whatever it may be, every issue has an answer.

It is essential to remember that you always have a choice. And sometimes, the choices you make may not be easy: in fact, you might be facing tough challenges when it comes to resolving your difficulties.

The Eight of Swords can signal a loss of direction and confusion. It is the card that shows up at those times when you find yourself asking, ‘How did I get here?

The Eight of Swords can be a wake-up call for you and one that can make you feel fearful. Sometimes realizing the truth about your life can be very daunting, but not knowing those truths can worsen. Leaving you feeling trapped.

Take the time to look at your options, and now may be the time to confront your fears, but your situation may not be as bad as you think. Nothing can make you feel as negative as you do right now. Look for the answers; they are there. You have to put in the effort.

Sometimes the only person that is trapping you is you is yourself.

The Eight of Swords in the blocked position is the same as the upright meaning. Sometimes, it can be accompanied by emotions such as guilt, anger, and maybe regret. You may be feeling cynical and even frustrated. Perhaps you have not been following the right path for you, which has left you feeling uncomfortable and confused. As with the other minor arcana cards, the eight swords show that this phrase will not last long.