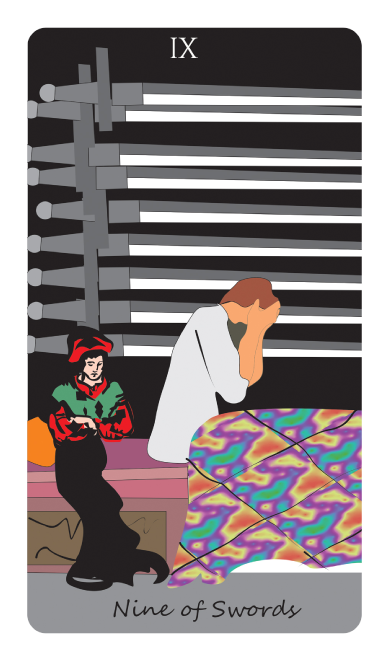 In The Nine of Swords, we see a person sitting upright in bed, holding their head in their hands; they look consumed by worry and are clearly in distress. Nine Swords appear behind the person, like bars on a window.

This Nine of Swords is the card of anxiety. Worrying can warn you when you might be on the wrong path, facing difficult times, or maybe you are avoiding something that needs doing. Often this worry can turn to anguish as you find yourself repeatedly being tortured. With questions such as “Did I do the right thing? Or “will it work out?

At times, life can appear overwhelming, and you may find yourself prone to dark thoughts. I have heard of this card being called the 2 a.m card. Those thoughts that just will not leave your mind when you sleep.

The suit of Swords represents overthinking, and The Nine of Swords is probably the most significant indicator.

Maybe your dwelling on the negative side of life rather than looking at the positive solutions to your problems.

Perhaps your so overwhelmed by despair that you can’t see the light at the end of the tunnel. Too much thinking and not enough action, no wonder you’re not sleeping.

Maybe you can talk to someone about your concerns and learn some techniques for dealing with your problems in a healthier way. And that will help you feel more in control, and then you will be able to face the issues head-on that are causing you to worry.

When you find yourself in control, any future restrictions you face, you will be able to meet them in a far more practical and confident manner. You will see that your attitudes to your problems are making you feel worse than you need to. After all, the reality is rarely as frightening as you make it out to be.

The Nine of Swords tells you to calm your worries and try and keep them under control as much as you can. This doesn’t mean disregarding them and pretending that they are not there, instead listen to them, understand, and learn how to change them.

Try not to put as much energy into your worrying as you do. And all the fretting and worrying in the world isn’t going to change a problem.

Instead, think about focusing your anxious energy on doing something about your worries. It might surprise you how little power it can take to change your circumstances.

You might have a sense of being overwhelmed by guilt. The past is the past and whatever happened needs to stay there. It is just that the past, even if you now feel that you reacted in the way you believed was right at the time. You have no place in your life for guilt, and you can’t go back in time. What has have been done is done. Now the only thing for you to do is move on.

You may be feeling low or even depressed at the moment, but it will pass. Everyone will at some point experience a Nine of Swords moment in life from time to time. It’s how you chose to let it influence your life is the question. You need to use this time to learn and grow.

When it shows up in the blocked position, the Nine of Swords meaning suggests almost precisely the same as the upright meaning. Just in the more extreme than that of the upright. However, you have reached the lowest point of the cycle, and things will get better as you move out of this phase.