The Minor Arcana > Page of Wands 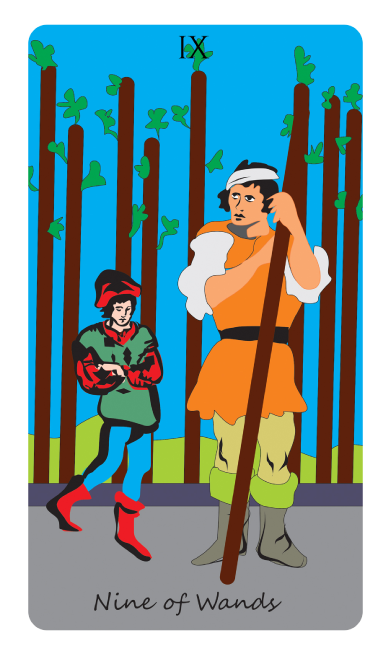 The Nine of Wands shows a man supporting himself by leaning on his wand. There are eight additional wands behind him; They are Planted firmly in the ground; they seem to be acting as a barrier. He is wearing a bandage on his head, indicating that he has been in battle. He looks tired and worn. His expression is wary as he gathers his strength.

You may feel at the moment as if you are moving one step forward and taking two steps back. And whatever you try to achieve at the time is proving difficult and challenging.

The Nine of Wands speaks of relentless determination, facing all the battles life has to offer, and still finding yourself remaining strong in the end. This is the card of courage, determination, stamina, and integrity.

You might find yourself facing battles, but you might not always experience them on a vast scale. It can be seen as the card of the hero. Most brave actions in the world are small, involving little steps, and most go seemingly unnoticed, even to yourself.

This card can signify that you need to recognize your own small yet valiant steps towards justice and a better world.

You might find it likely to be a difficult period in your life, and you might feel that luck is not on you. But it would help if you didn’t often despair. Sometimes tricky times situations can be the beginning of our most outstanding achievements. And when you find that conditions have turned in your favor. You will be able to see why so many obstacles were in your way in the past.

This card represents many things. You are in a powerful position. You have fought long and hard to get where you are now.

However, it can remind you of the consequences of engaging in the battles that you can face in life. Everything has its price in life, and the Nine of Wands is no exception. It reminds you of how you might become battle-scarred, worn down by the relentlessness of life’s demands.

The Nine of Wands suggests that you will be able to overcome any obstacles in front of you. You may be feeling defensive and feel that you need to protect yourself, but don’t push away those with good intentions who want to help you.

The Nine of wands advises you to look after yourself and take care of any emotional wounds you may have suffered so far. But do not let these wounds define you. That was then, and this is now.

No one knows what’s around the corner. So use your strength of character. And learn from your past accomplishments to help you through any future stages of your life. It will help you face any problems you have with determination, persistence, and courage.

If you find yourself dodging an issue that you should deal with, it will not go away on its own. Try and listen to your intuition. Let it guide you as to the best way to deal with the situation. When you are involved in an awkward situation, facing it, head-on will allow you to learn much more about yourself and let your confidence grow.

The Nine of Wands in a blocked position suggests that you may have faced a series of battles, which might have left you feeling scared, defensive. Now might be the time to let your guard down and start trusting people again.

It is important not to let your wounds define you.