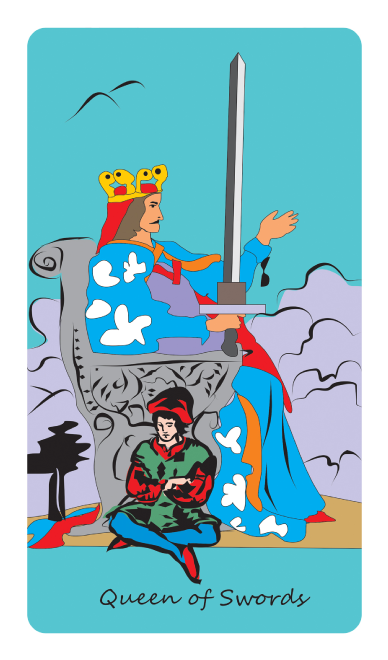 The Mature Queen of swords is sitting on her throne, and she is facing to the right, with her gaze looking at something off in the distance. In her hand, she is holding a sword upwards in a defensive way, and her other hand is reaching out in a gesture that she is gesturing someone to come forward.

The Queen of Swords can be a very private person, independent with authority and power. She doesn’t need or want friends. Still, if you are lucky to be in her inner circle, you have a friend for life. Still, she is highly selective about who she allows into that circle.

Maybe you have the courage and integrity to stand up for what you genuinely believe in. However, the Queen of Swords does. She has the bravery to say how she feels. The Queen is often the first to stand up for any injustice that she sees. Usually, the Queen of Swords does not think before she speaks, and when she does speak, she will tell it exactly as it is. You could say she is very judgmental. And even though she is quick to criticize others, she does not take criticism very well herself.

The Queen of Swords is a woman of the world, and there isn’t anything that she hasn’t seen or done herself, so it is tough to pull the wool over her eyes.

The Queen has a very sharp tongue, and her mind is razor-sharp.

The Queen of Swords suggests that you will also gain courage and integrity by adopting her spirit.

She is asking you to notice if there is an injustice of some kind occurring in your life. Trust your intuition, so you are in a better place to spot any wrongdoings.

With this card, you are advised to look at both sides of a situation that may be volatile. You must be flexible, as you may find yourself in the wrong. If you find yourself being drawn into an argument, it is in your best interest that you stay impartial. Do allow yourself to be drawn into any disputes.