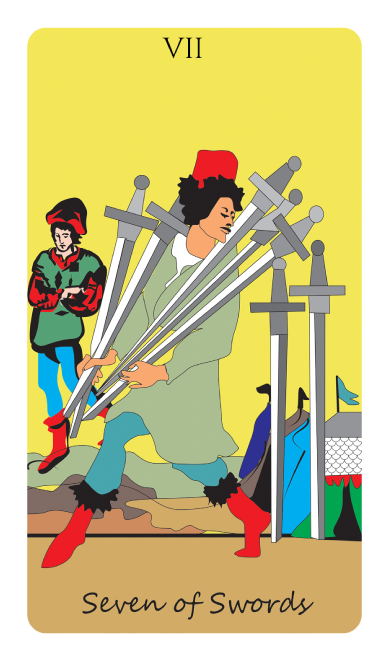 He has an air of smugness, as he thinks that he has got away with the theft.

The common name for the Seven of Swords is the thief. And the message is to protect your belongings and property. Nothing is quite what it seems.

You might feel that someone around you is not telling the truth. You are probably right to trust your gut feeling. Or maybe you’ve found yourself drawn into a situation that is making you very uncomfortable. If this is the case, it’s time to step away to save yourself from becoming a victim.

The Seven of Swords can represent the avoidance of responsibility, that little bit inside you that might want to remain childlike. This card can also speak of your psyches’ hidden darker side. There might be a side of you that’s behaving dishonorably, Even when you don’t want to and know that you are misbehaving. It’s that little devilish voice that lies within you that wants you to create mischief and see what you can get away with.

The Seven of Swords can ask you to confront the part of you which wants to stay lurking in the shadows. Maybe it’s time to look at those features of your character that you don’t like.

This is the card of caution. It’s advising you that you must stop burying your head in the sand over a worrying situation. It’s now time to face the consequences. In a problem avoiding the truth will only make matters worse. If someone around you is offering you advice, do not let them bully you into reacting to a situation or doing something that makes you feel uncomfortable.

When The Seven of Swords shows up with a blocked meaning suggests that you may have been misbehaving. Have you been hiding a side of yourself that you’re not proud of?. Is there something about you that you wouldn’t want other people knowing?

Do you find that you give up quickly rather than taking a stand?.