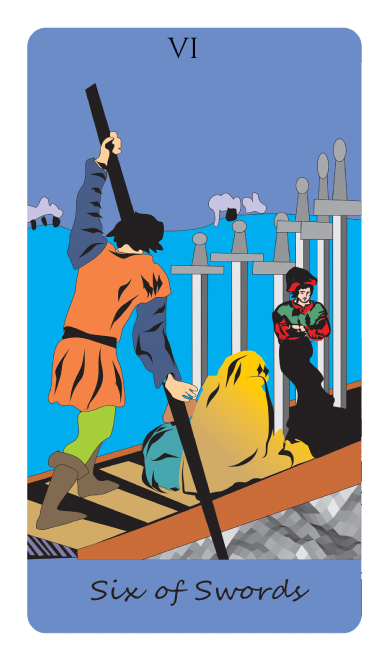 The Six of Swords shows a young man steering a small boat with a woman and a little child as his passengers. Six Swords are standing prominently with the front of the ship. The water is calm and flat on the boat’s left side and choppy on the right side. They are heading into more tranquil waters. And better times.

The card signifies that you have been through emotional turmoil. But are now working towards a brighter future And putting the past behind you. The Six of Swords marks a new phase in your life. This is the calm after the storm.

However, this may not turn out to be as easy as it sounds.

There may be a lot to deal with, and it’s important that you can draw a line under any unpleasant situations for you to move forward. You will always find the light at the end of the tunnel.

The Six of Swords can represent a period when you may need to pull back temporarily to get to a better place or just a better perspective of yourself or the world around you. It’s not easy going about your everyday life while you are unclear about what you’re really doing.

Maybe it is an excellent time to take a break from work or your natural environment, maybe travel.

The Six of Swords tells you not to hold on to any negative influences from the past. We might have been feeling the motion with the rocky waters on the boat’s right that signify your turbulent emotions, but notice you are moving towards calmer waters. You now have the opportunity for a new beginning, so try not to let grief, anger, or resentment hamper your resolve to make a better future.

The Six of Swords promises a brighter future as long as you are patient, have faith, and see things through. This card reminds you that life is not a long succession of successes and highs; You will face trials and struggles along with the highs. If you see this as a blessing, you will be able to endure the hard times too. The phrase “This too shall pass?” that the Six of swords’ message will pass whatever it is.

The Six of Swords in the Blocked position can suggest a similar meaning as the upright meaning. It reveals your need to escape, but your plans may be delayed. But don’t rush into traveling or leave an unfinished situation. Before you can address and find a way to resolve any problems

You maybe feel frustrated by the lack of progress you make and wonder why you don’t have it all together.

But stay focused and grounded, and your time will come.