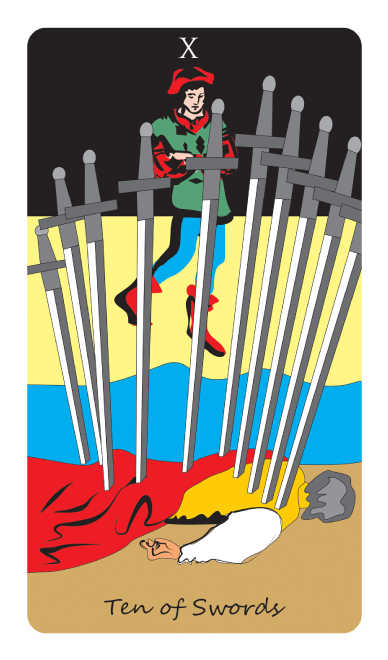 A victim is lying face down on the ground with Ten Swords in his back. The sea in the background is calm, and it shows that the negative aspect, which might have been quick, has now passed. I notice that the Swords seem to fall out if you turn the card upside down and the sun is setting.

The picture on this card is often more dramatic than your current situation. But it does make you sit up and take notice.

The Ten of Swords is another problematic card. It can relate to a time in your life when you are feeling at your lowest. But often, it’s your perceptions that make the situation feel worse than it is.

This card talks about your beliefs that everything is going wrong in your life, rather than seeing the reality of what you have instead of what you don’t.

When the Ten of Swords appears, it can suggest that you need to make a clean break from your past. It’s time that you got rid of any images that may have been clouding your vision.

Sometimes when life feels challenging and you find yourself facing trials, you may also feel negative. It sometimes feels like that; however hard you try, things always seem to turn against you. And that is not actually the reality.

Perhaps you feel that you have been emotionally stabbed in the back or been the victim of someone’s anger.

The number Ten card is the last in the suit of Swords, and therefore, it is a reminder to you that endings and beginnings are a natural part of the cycle of life. If you have had an issue with someone, it’s time to move on and let it go.

You may feel that you can’t cope with the challenges that life presents you at the moment. However, these challenges could be life’s way of asking you to believe in yourself.

You may have been allowing negative feelings about yourself to drag you down, and, in turn, that is holding you back.

The Ten of Swords predicts you will gain strength and then become better able to cope. You may have been allowing yourself to have negative feelings that seem to drag you down. But you will realize that when you stop carrying all that extra baggage, that’s weighing you down. You will be able to recognize how you have been carrying your past and allowing it to hold you back.

And then you will find that you no longer need to hide from life’s challenges and will find yourself feeling braver and able to face them head-on.

Sometimes, life is becoming too difficult can become a self-prophecy if you do not adopt a new healthier perspective. You could then actually invite one Sword after another to stab you in the back. Ask yourself, is it worth it?

And then realize that you have the power to change it.

The Ten of Swords can remind you that there is a possibility you have been doing too much for other people. Without any thanks or appreciation. Or maybe you are feeling burdened by an ongoing commitment. Is it time for you to give generously?. Or should you not give at all, as the pressure is getting to you. You may have started something but are now feeling resentful. If this resonates with you and is the case, you need to remove yourself from the situation.

When the Ten of Swords appears in the blocked position, it suggests the same meaning as the upright card. Still, there may be more repercussions. You may have been feeling week or unable to cope. Maybe you’re fed up at this present time with the run of bad luck you seem to be going through. However, the Ten of Swords suggests that maybe your attitude contributes to the rough patch you are going through. You must use your inner strength to change your negative beliefs and change the situation for the better.

Remember that this phase will pass; things always seem darkest before dawn.