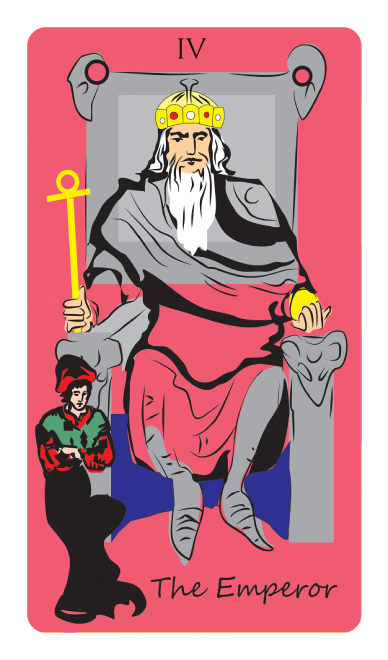 The Emperor sits prominently upon his stone throne. He does not need extravagance surroundings; his strength and stature speak for themselves. He is different from the Empress as there is nothing soft about him.

He is the highest leader; he decides the structure and the rules of the game and expects people to play. He is the leader of the Tarot family, and by being so, commands authority.

The Emperor is neither a dictator nor a compassionate leader. He is power exemplified, and he is all about authority.

The Emperor believes in getting things done. He uses his position of self-assurance to make sure that these things get done correctly. The Emperor expects you to have a disciplined approach to life.

The Emperor signifies a male figure you respect. There is a demeanor of authority about him, and he could be a father figure or an older man.

You will likely be seeking direction from the Emperor now or shortly. This will allow you to display your leadership skills and start taking control of your life.

The Emperor shows up to help you organize your erratic thoughts and teach you how to structure your priorities. This newfound strength may surprise you, allowing you to feel proud of yourself.

Perhaps you will start to find that you can stick to a decision once you have made it, rather than sitting on the fence and doubting yourself.

The Emperor is asking you to adopt his commanding attitude, behaviors, and beliefs. its time to take control of your life and, most importantly, learn to stay in control.
The Emperor symbolizes structure and stability. Maybe now could be an excellent time to start to declutter your life, both in a material sense and also emotionally.

This card’s strength advises that you will not lose an argument if you have done your homework and have all the facts. But it would help if you stayed true to your views and beliefs.

If you plan to start a new project, try not to overthink the situation, which may cloud your judgment. Try not to rush into things, take a little longer, take a deep breath, take time to regroup your thoughts.

And then don’t be scared to step up and take matters into your own hands.

By doing so, you will find yourself able to provide personal security and, what’s more, be in a place to inspire others.

The Emperor’s energy will help you create the order you need and teach you to be more confident and self-assured. If you believe in yourself, anything is possible.

It’s now time to stand up, take the lead, and control your life. You can build the foundation for your future.
This card is about hard work and being disciplined, seizing life by the balls, understanding what you want, and going after it. For the Emperor doing nothing is not an option.

Throughout history, the Emperor is seen as a figure of influence. Now is the time to trust his guidance, for he is wise and has the experience, and he will give you honest advice.

Affirmation:  “Only I am in charge of my life.”

The Emperor suggests that you are feeling a little out of control. Maybe you have allowed other people to make decisions for you and feel as if you have lost control. Your self-esteem may have been affected. You need to develop the skill of the Emperor to exert power and take charge of your life.