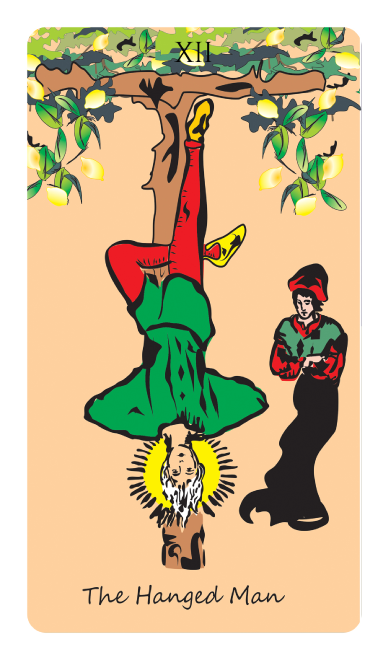 The Hanged Man is an unusual card, with its strange appearance of a man dangling from a tree; The name of the card seems dark. Yet when you look at the man’s face, he appears calm and relaxed; there is even a slight smile on his face. And also, The Hangman seems content regardless of his situation. He has a bright yellow light over his head.

Often when people see this card, they panic and imagine something terrible is going to happen.

The Hanged Man suggests that maybe you are facing a frustrating time in your life at the moment. When it seems that nothing is advancing the way you want it, whatever you try to do is taking more effort than you feel is needed. However, you may feel like you are banging your head against a brick wall hard you work to advance. “It might feel like you are taking one step forward and ten steps back.

The Hanged Man”s message is that there are certain times in your life when the only way you can get what you want is to let go of what you have.

You might have to give something up to achieve your goal.

Sometimes, to move forward, you need to take a step back, and if you’re going to win, you might need to yield first.

Things are rarely in black or white, but often you find that your views on things are locked in one direction, and you don’t want to see things another way. Sometimes in a situation, the only thing to do is move forward.
The card suggests that you may face a situation in which you will need to make some sacrifice or to give in, rather than battling an uphill fight.

You may find that this sacrifice involves letting go of a part of yourself.

You might find it hard to make choices and worried that whatever choice you make will be the wrong one. So instead, you would rather do nothing and try and ignore a situation.

But you know that you have to take a deep breath and move forward at some point. If you do nothing, then you are only delaying the outcome. And burring your head in the sand is not an option. – unless you’re an Ostrich.
There is a slight air of stubbornness about the Hanged Man: some Tarot readers say it is the card of martyrdom.

It’s important to remember that you will achieve nothing by standing still and ignoring things. Or as you see on the card, hanging around and waiting as the hanged man is.

You can also associate the Hanged Man as a card of limbo, showing you that somethings might be on hold, but you need to wait things out, and by doing so, you will gain a whole new outlook on life.

However, if you feel that there is genuinely nothing you can do to break your frustration, it is alright to let yourself move on. Maybe now is not the time for you to push concerns.

Affirmation: “I will surrender to the Universe.”

The Hanged Man card in the blocked position can be a sign that you are too rigid. Maybe it’s time to change your expectations. What you feel you want might not be possible at the moment. The Hanged man is asking. Perhaps you are hanging on to a dream or fantasy. And if you are, that mindset may make you a victim rather than a winner.